Sign up for MyChart to manage your health records and appointments 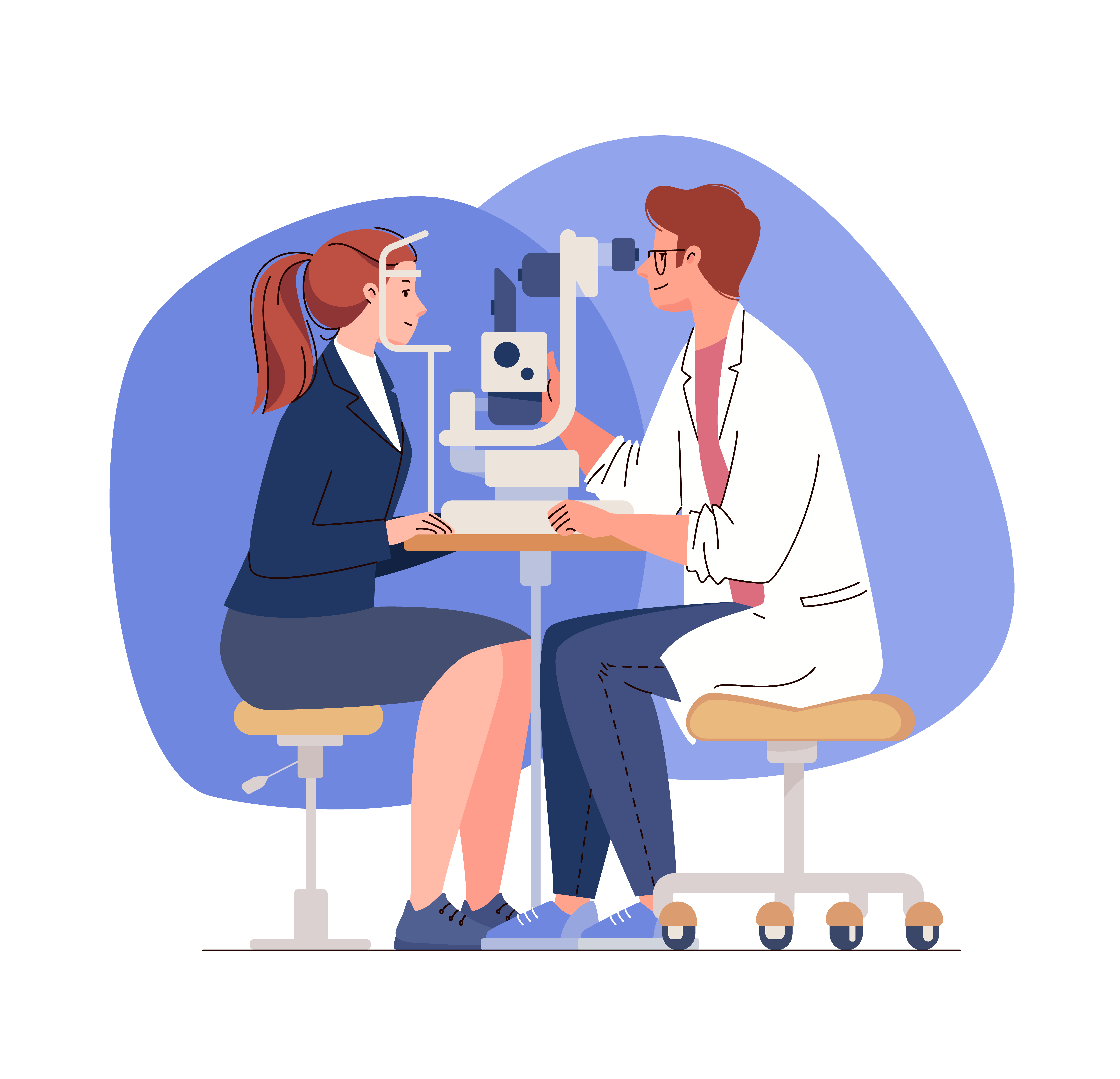 How we can provide care for your family’s vision needs

Eye exams are vital to your overall health. However, the surprising truth about eye disease is that there are often no symptoms early on.

In addition to assessing your visual acuity, your eye care provider will test for common eye diseases, assess how your eyes are functioning together, and more. Serious health issues like diabetes and high blood pressure are often first detected during an eye exam. Your optometrist will determine what tests are needed based on your medical history.

Through our faith-based centers, we improve the health and well-being of low-income persons in the communities we serve 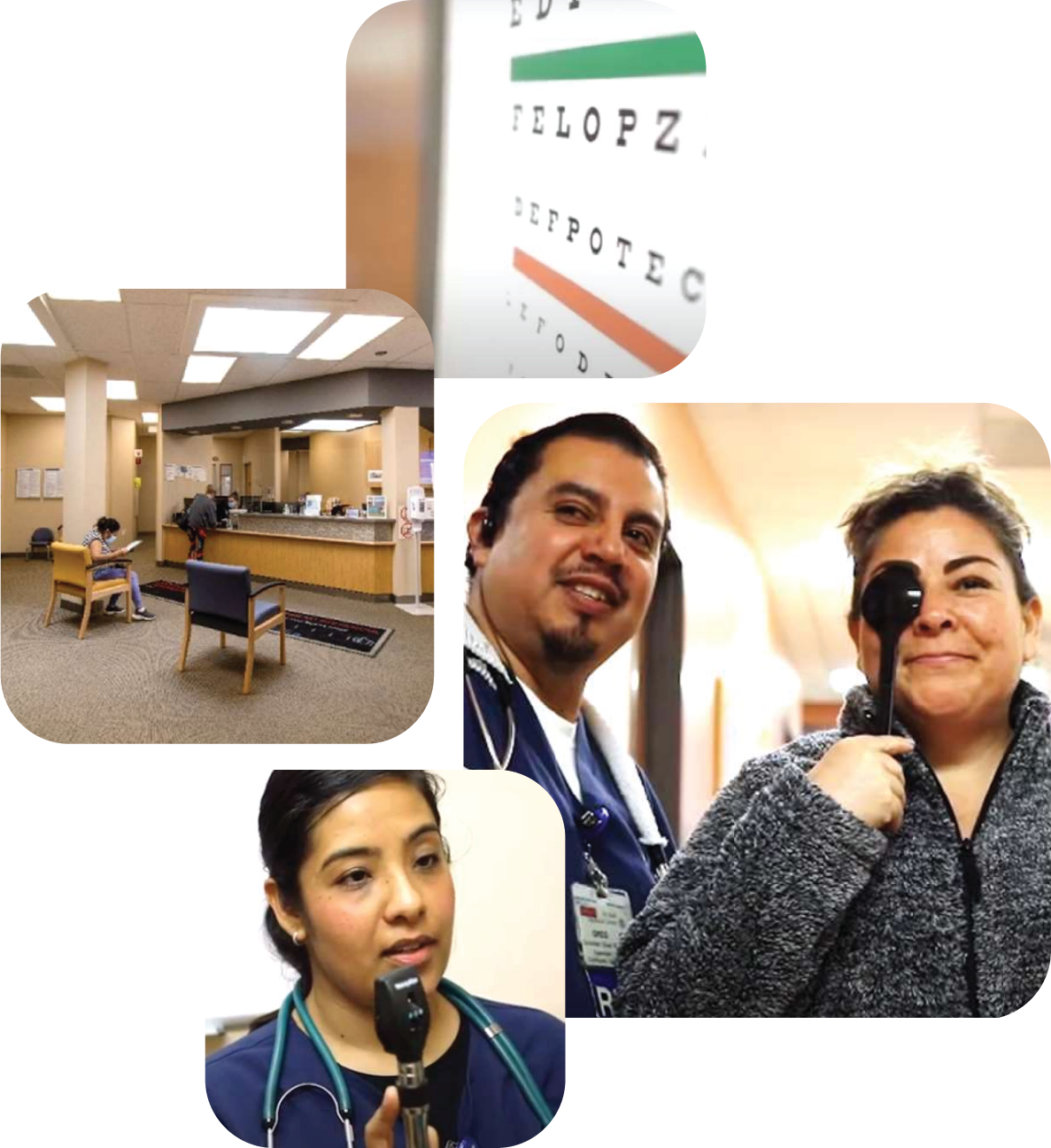 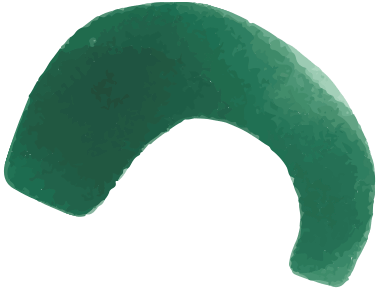 1. How often should I get a comprehensive eye exam?

Most eye care professionals recommend yearly eye exams. But it depends on your age, risk factors, and whether or not you wear corrective lenses.

The American Optometric Association (AOA) recommends children have their eyes examined at 6 months old, three years old, at the start of school, and every two years until age 18.

For adults, the AOA recommends a comprehensive eye exam every two years for ages 18 to 60 at a minimum and annual exam for seniors age 61 and older.

2. What are the most common ocular diseases?

Age-related Macular Degeneration (AMD) is the leading cause of blindness in men and women over age 50. AMD is a disease of the retina, the light-sensitive portion of your eye. The retina is located at the back of the eye, and the macula is a small area near the very center. Your macula is responsible for your central vision.

In AMD, the macula loses its ability to detect light, resulting in a partial or total loss of central vision. People with late-stage AMD are unable to see objects straight in front of them, making it difficult to perform many activities, like using a computer, reading, driving, or recognizing faces.

AMD typically causes no symptoms until vision begins to fade. Having routine eye exams, especially over age 50. One of the most important things you can do is have regular eye exams to monitor the health of your retinas.

Glaucoma is an eye disease that causes damage to your optic nerve. It typically results from a build-up of fluid in the front part of the eye. The pressure caused by this extra fluid damages the optic nerve, leading to blindness. Left untreated, glaucoma can result in permanent blindness in just a few years. The seriousness of this common eye disease underscores the importance of having regular eye exams.

Cataracts are probably the most well-known eye condition associated with age. By the age of 80, more than half of all people living in the US either have a cataract or have undergone cataract surgery. Inside your eye, there is a natural lens that is normally clear. Over the years, changes in the eyes lead to the breakdown of the lens proteins, causing them to become cloudy. When viewing things through a cataract, items may appear hazy, blurry, or less colorful.

In general, cataracts develop in both eyes, though not always evenly. Because the cataract in one eye might be more developed than in the other, there could be a marked difference in vision.

According to the Center for Disease Control and Prevention, nearly one-third of adults over the age of 40 with diabetes have diabetic retinopathy. And the rates are even higher among African-Americans and Mexican-Americans. Diabetic retinopathy is a serious complication of diabetes that affects your eyes. It is the number one cause of vision loss in diabetic patients.

Diabetic retinopathy is caused by damage to the blood vessels of the light-sensitive tissue at the back of the eye (retina). This causes bleeding, swelling, and abnormal blood vessel growth. The longer you have diabetes and the less controlled your blood sugar is, the more likely you are to develop this eye condition.

3. What if my child is having trouble seeing?

Routine eye exams are a crucial part of your child’s well-being and readiness for learning. The good news is that many eye disorders can be successfully identified and treated. Your child may be experiencing a vision problem if he or she does any of the following:

• Avoids reading and close-up work like coloring or doing puzzles

• Seems to work slow or not understand the task

• Complains of fatigue or headaches

• Has a short attention span or seems distracted

• Covers one eye or tilts head when focusing on something

• It can be difficult to identify vision problems in kids.

Talk with your eye care provider about protecting your eyes from ultraviolet (UV) and blue light. When you go outside, wear absorptive sunglasses and a wide-brimmed hat to reduce your UV exposure. Ask if there are special sunglasses or tints you should try with your particular type of eye condition.

If you are thinking of trying a new diet or changing vitamins, check with your doctor first.

Do not take up smoking, and if you do smoke, try to stop. Tobacco chemicals damage the blood vessels behind your eyes and increase your risk of developing age-related macular degeneration. Tobacco use is also associated with other eye diseases, including cataracts and diabetic retinopathy.

Wear protective goggles when working with tools and machinery, as well as during recreational activities.

Use Our Online Locator

Through our faith-based centers, we improve the health and well-being of low-income persons in the communities we serve.

The health centers receive HHS funding and has Federal Public Health Service deemed status with respect to certain health or health-related claims, including medical malpractice claims, for itself and for its covered individuals.